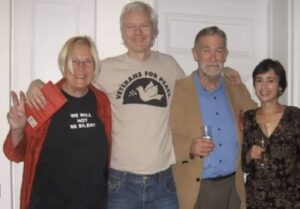 The First Unitarian Society of Milwaukee recently presented a live-streamed video conference titled “The Trial of Julian Assange and Its Implications for Press Freedom.” Ann Batiza, a Milwaukee-based researcher, academic, and peace activist served as host of the call. Local Greens were among the attendees. Two speakers with first-hand knowledge of the arbitrary detention (as determined by a UN body in 2015), torture, and extradition trial of the Australian Wikileaks publisher described a now decade-long persecution intended to suppress dissent and opposition to US imperialism. The physical and legal assault ultimately threatens to criminalize investigative journalism.

Nils Melzer, UN Special Rapporteur on torture, Professor of International Law at the University of Glasgow, and Human Rights Chair at the Geneva Academy of International Humanitarian Law and Human Rights, shared how he was first approached by Assange’s legal team to intervene on his behalf in late 2018. Melzer initially refused to engage with the case as he, like most of the public, had come to believe that Julian Assange actually was the “rapist, traitor, hacker, and spy” the relentless media propaganda campaign presented him as, and he resolved to not allow such an individual to manipulate him.

Approached again in March 2019 when Assange’s lawyers feared he may soon be expelled from the Ecuadorian Embassy, and at which time they presented him with a few key documents as well as a case summary, he “figured that my professional integrity demanded that I at least take a look at the material.” Once he looked into the actual facts of the case, “what I found filled me with repulsion and disbelief,” as the “narrative I had in my mind was not supported by the evidence.” As he no longer knew what was true or which source could be trusted, he decided to meet with Assange, who by this time was incarcerated at London’s maximum security Belmarsh Prison following his arrest on April 11 after the Moreno government withdrew his political asylum.

For his initial visit with Assange, which occurred over a 3 day period in early May 2019, Melzer was accompanied by two highly experienced medical specialists. He wanted to have an objective medical assessment in addition to his own. By his own admission he did not expect to find anything “dramatic”, however what he did find shocked him. He and the other doctors, who had conducted their own independent assessments, all concurred that Assange “showed all the symptoms that are typical for a victim of psychological torture.” The aim of such treatment is “destabilizing a person through isolation, through threat scenarios, constant arbitrariness, changing rules, and people being purposely pushed to their physical, emotional, and psychological limits through non-physical stressors.” Having observed Assange in this diminished and broken state in Belmarsh, he resolved to complete a full investigation. 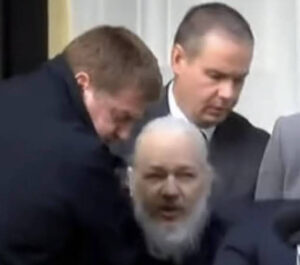 Melzer found serious flaws with the rape allegations against Assange in Sweden. He was able to review the original police documents as he is fluent in Swedish. What those documents revealed was clear; namely that the two women involved were concerned with possible HIV transmission rather than rape. It was local police who changed the nature of the case. This occurred shortly after Wikileaks revealed the Afghan War Diary, at the time the largest public expose in US military history, that had followed on the heels of the April 2010 release of the Collateral Murder video which depicted the “gunning down of two Reuters journalists and 10 other unarmed civilians.” Sweden is a close ally of the US in the Afghan War. Britain and other countries exposed by Wikileaks are also parties to the alliance. The implication of this is that Western governments colluded to concoct a serious charge against someone they perceived as an enemy.

Wikileaks’ journalistic ethics were also discussed at the UU meeting. To date, Wikileaks has never published false information. Assange has not stolen or hacked information, but rather received it as a journalist would receive it, then published what he received from sources if it was in the public interest to do so. Assange also took great care to redact documents in order to protect lives. Melzer believes that Wikileaks published evidence of grave war crimes, and that there are criminals in uniform who should be prosecuted. He said, “Those who commit the crimes are the traitors, not the whistleblowers who expose them.” He concluded that the campaign against Assange is about criminalizing the truth.

Ray McGovern, (whose hair/beard grows in disheveled witness to the uncivilized treatment accorded his friend Julian), a former CIA analyst and presidential daily briefer for three presidents, co-founder of Veteran Intelligence Professionals for Sanity (VIPS), and an activist for peace and justice, opened his remarks  with a quote from Death of A Salesman: He’s a human being, and a terrible thing is happening to him. So attention must be paid. He’s not to be allowed to fall into his grave like an old dog. Attention, attention must be finally paid to such a person.

He then went on to describe the warm and caring spirit of his friend Assange, whose “devotion to justice puts other people’s fate above his own.” This portrayal is in contrast to media reports of his having an abrasive personality. Ray presented multiple photos of Julian sharing poignant moments with friends and family, including an image of him lovingly holding his then newborn while still confined in the Embassy. Julian’s children (Gabriel and Max) are growing up without his presence in their lives. So are his partner Stella and his own parents, who are all involved in his fight for freedom. The contrast in Julian’s appearance in a few short years is stark, and no doubt a result of the arbitrary detention and psychological torture he has been subjected to for the past decade.

McGovern believes Assange’s technical skills for digital transfer of forbidden information made him a major threat to and consequently a target of global elites. He also speculates that people with information could have used Wikileaks to save lives in past crises such as Vietnam and 9/11 had it been available at the time.

Ray continues with a reference to a favorite though little known MLK Jr quote from his Letter from a Birmingham Jail that speaks to the need for “disclosing truth”, which he compared to a boil: Like a boil that can never be cured so long as it is covered up but must be opened with all its ugliness to the natural medicines of air and light, injustice must be exposed, with all the tension its exposure creates, to the light of human conscience and the air of national opinion before it can be cured. McGovern believes that Julian’s view about injustice is similar and that he was willing to pay the price for exposing it, as demonstrated by his efforts to help get Edward Snowden to safety in 2013, even as Julian himself was already being persecuted by the state.

McGovern expressed his fear that the powers that be are hoping Julian will catch Covid-19 and die in Belmarsh, which considering his compromised health, is a very real possibility. He closed with a call to action: “it’s up to us to build some arks, folks,” as the rain that has been predicted “has been falling for ten years now”, and that a “truth-teller is worthy of all the support we can give them.”

A lively discussion followed the presentations by the two speakers. An attendee identified as Dr Deepa Driver disclosed that she had been a legal observer at Julian’s September 2020 extradition hearings and she stressed that the psychological torture continues to this day. She stated that she was appalled at the way access was denied to legal and press observers at the trial, and that Julian, including his family and supporters, continue to be treated with “very little humanity”, and also that minimal attention was paid to his due process rights. The case in her view seemed to “follow the pattern of the Stratfor leaks, where they said that they would move Julian from country to country, treat him like a bride in prison, and make him eat cat food.”

Deepa also stated that Julian still had not received the warm clothing supporters provided him in October; this despite the fact that the heating system in the prison had broken down several times, and the temperature in London has been below zero on recent nights. She reiterated that this kind of treatment of a “highly intelligent, visionary, human being is unconscionable” and we have to come together to oppose this kind of behavior. We need to do it for the protection of whistleblowers, for the freedom of the press, for Julian, but most importantly, we have to do it for the protection of citizens’ right to know “about the crimes governments commit in their name.”

Nils Melzer clarified that while the UK judge’s decision to not extradite Julian to the US was what Assange’s supporters were hoping for, it was also very misleading in that her judgement confirmed the entire narrative of the US prosecution. It basically confirmed that if a journalist publishes information the government does not want published, regardless of public interest, it can be prosecuted as espionage. He also mentioned that the judge went even further with her ruling; namely that such journalism would be punishable under the Official Secrets Act of the UK, which sets a precedent on both sides of the Atlantic. More broadly, as the OSA is a model for other secrecy acts in the whole of the Commonwealth, if the judgement stands it essentially sets an “emerging worldwide” precedent.

Melzer argues that if it becomes a crime to tell the truth, then we are truly “living in a tyranny” with no democratic check on government power. Not known for being an alarmist, Melzer was emphatic that this judgement is “urgent, alarming, and fundamentally dangerous.” He also went into some detail about the appeal process, and mentioned that even if the US loses its appeal and the decision stands that Assange will not be extradited, it won’t be because he’s right but because he is currently too weak and would likely be a suicide risk in the oppressive US prison system. So if the government should ever determine that his health has improved, Julian could again be detained for potential extradition by any country that would allow him to reside there. He agrees that Dr Driver was spot on with her reference to the Stratfor playbook as we are watching it play out in real time, and stresses that there is “no reason at all for anyone to be relieved” by this judgement. 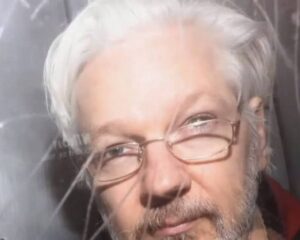 There is joy in sharing information that is being totally and deliberately suppressed by the mainstream media. Attendees likely came away with a greater intention to follow Ray McGovern’s call to get out there and make some noise for Julian Assange.

Please email Ann Batiza at annwisc@gmail.com if you are motivated to take action.

Ann also encourages you to visit https://assangedefense.org/ where you can sign up to Defend Julian Assange.

A shorter version of this post originally appeared at https://literatenaturalist.wordpress.com/2021/02/02/justice-for-julian/